This is Sam's nightmare. The airlessness. The dark.

Usually he's wearing a suit. He's not wearing anything. Usually, he's in a coffin. He's wrapped in plastic. His fingers find a long zipper. He's running out of air.

Sam claws the zipper open from the inside while his mind fumbles sluggishly with the evidence. The zipper parts and the plastic peels back, birthing him into more darkness with cold metal walls.

Usually he wakes up. He flails against the walls, punching and kicking, fighting to get free. Blood from his knuckles traces hot lines down his arms.

This isn't Sam's nightmare. This is real. He can't breathe.

Terror bursts out of his skin, blows the walls aside, and everything comes in on him. Corpses tumble down, weigh him down underneath them. His power is out of reach as fast as it came and he has to fight his way free.

Voices echo down a long hall, instinct sends Sam skidding across an icy floor and under something. A gurney. The lights are up and he can see a laundry cart. Scrubs.

Someone's shouting in the distance still but nothing's growing closer. Of course not. Emergency procedures. He's in a morgue. He knows this morgue. As he pulls on scrubs, he recognizes the stamp on them. There's three doors. The hall, the hearse drive-up bay, and the staff room. The place is going to be evacuated before anyone comes back in.

This has to be a dream. Sam knows, without knowing how or if he's even right, that he needs to cover his tracks. If it's not a dream, he can't get caught. A morgue is full of flammables. 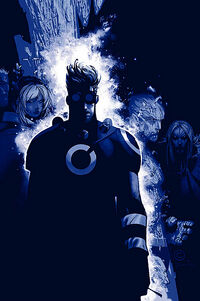 Sam pulls gloves on over his bleeding hands and dumps chemicals over where he buckled and blew out the cold chamber. Safety procedures in reverse. The last steps are the formaldehyde and the broken light bulb. Sam is already in the staff room when everything goes up in flames.

Sam's lucky, more than one worker is close to his size. He takes clothes and boots from the lockers, then decides where to go from here. His shields hold the fire back long enough for him to pass through and out the far doors into the drive-up bay.

The fire trucks are just coming up the main drive. Sam ducks out the other side of the bay, scales the fence, and lands in the thickly-treed property that separates the hospital from the residences behind it.

This is a nightmare, but not one he's going to wake up from. He's close to home. Maybe fifty miles off. And all the evidence suggests he's dead. Was dead. Ma must know he's dead so he has to set her straight before anything else can happen. She's going to kill him when he gets home.

Retrieved from "https://heromux.fandom.com/wiki/2012-11-02_Dead_Like_Me?oldid=12841"
Community content is available under CC-BY-SA unless otherwise noted.