Courtney Whitmore. She stole a belt to tick her step-dad off and thus became the new Star-Spangled Kid. Step-dad made a giant robot suit to travel as her bodyguard. Now she's the new-and-improved 'Stargir'l out to make a name for herself. She has a fancy new Cosmic Staff to do it with. 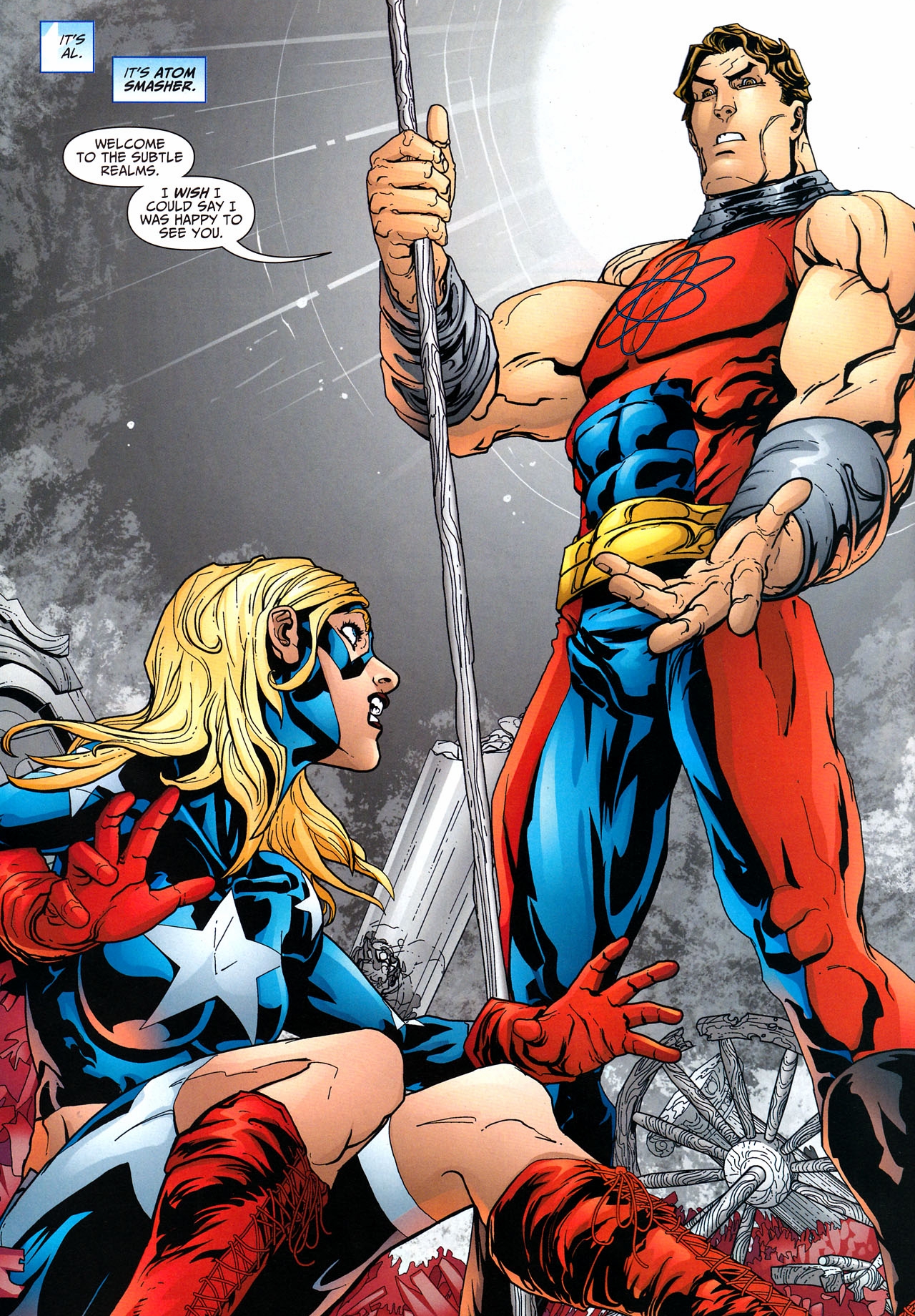 Limitation: Must be wielded.

A staff actually GIVEN to her by the former Starman, Courtney is able to fly (while holding or balancing upon) with the staff in her possession, much like a witch's broom. In addition, she is able to project and manipulate energy from the device, in the form of destructive energy blasts, or simple constructs for defensive purposes (shields, forcefields, etc.).

Other features of the staff include collapsibility, the ability to make her outfit instantly appear on her, allow others to fly with her, attunment to it's owner (Courtney, thereby making it difficult for others to use), and the ability to receive mental commands from a large distance.

The Cosmic Converter Belt enhances Courtney's physical attributes, including increasing her durability to superhuman levels. She can take much more punishment than would otherwise be possible as a result.

Limitation: Must have staff.

Courtney's Cosmic Staff allows her to fly, as well as bring others with her in flight.

The Cosmic Converter Belt allows Courtney to fire blasts of 'shooting stars' which are capable of short-circuiting anything electrical, including the nervous system or organic beings.

Stargirl is an extremely skilled and athletic gymnast, capable of leaping and flipping with ease. She has trained herself to peak human levels of acrobatic dexterity.

Before getting her hands on the Cosmic Staff, Stargirl saw frequent use of her fists to carry her through the day and was primarily an acrobatic scrapper. Now that she's learned to throw cosmic bolts of shooting stars and beams from her staff, she doesn't punch nearly as often, but that doesn't mean taking away her weapons leaves her helpless.

Courtney's step-father is Pat Dugan, an engineer and mechanic of incredible skill. In the beginning of her career, the pair were partners in super-heroing. Regardless, her step-dad has contacts and advantages his technical expertise brings which Stargirl would not have access to otherwise.

Courtney Whitmore's entire family knows she's Stargirl. Surprisingly, they don't even give her a hard time about it! ...Anymore. Now if they'd just quit pushing college at her.

Shiv (Cindy Bruman): Courtney is blamed for killing her father when she was just starting her superheroine career (back when she was still the Star-Spangled Kid). Whoops.

Without her Cosmic Staff or Cosmic Converter Belt, Courtney Whitmore is just a teenaged girl who's really good at kicking and able to do standing handsprings. She might be skilled, but she can still be hurt and has no extraordinary powers if her equipment is taken away from her, damaged, or disabled. Her increased stamina does not extend to healing, so while she may be harder to hurt, once she IS hurt, she stays that way just as long as any other human.

Her gear is based on science, therefore things which operate outside the laws of known science can easily penetrate her defenses. From spells striking straight through her energy shields to being able to turn the Cosmic Staff into a giant snake, Courtney has no way to defend against magic.

Courtney Whitmore's dad has been absent for her entire life, leaving her to be raised by her mother. Life was very boring.

Barbara, Courtney's mother brings home Pat Dugan, begins dating him, marries him, and moves their family from Los Angeles to Nebraska. She blamed her new step-father and began acting out to get her mother's attention again.

Courtney goes through Pat's things, finding out about his relationship to the original Star-Spangled Kid. She takes his converter belt, determined to become the new Star-Spangled Kid with the sole objective to make Pat angry (possibly angry enough to leave).

Rather than shipping her off to military school, Pat designs and builds S.T.R.I.P.E., a power armor in which he can ride around with Courtney in to make sure she stays safe. They begin a crime-fighting stint together. Patricia Dugan, Courtney's little sister, is born during this time. Mike Dugan, Court's step-brother, also comes home from military school, raising tension in the family.

Courtney receives the Cosmic Staff from the semi-retiring Starman. Determined to make her own name for herself, she changes her name to Stargirl.

Retrieved from "https://heromux.fandom.com/wiki/Courtney_Whitmore?oldid=22955"
Community content is available under CC-BY-SA unless otherwise noted.