Rising as a giant T facing the eastward sky, the Titans Tower sits on an island in the middle of Delaware Bay, equidistant from Metropolis and Gotham. Around the base of the building, a well manicured field surrounds with entrances both at the base of the 'T' and into the cliffs that make a ring around the island.

Testament to what can be built with enough influence and money, Titans Tower was built in only a matter of months, crews working 24/7 to get the base of operations ready for the United States' junior super-team, the Titans of Tomorrow. 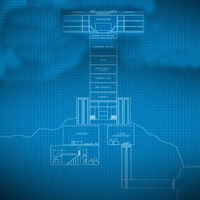 Add a photo to this gallery
Retrieved from "https://heromux.fandom.com/wiki/Metropolis/Titans_Tower?oldid=9727"
Community content is available under CC-BY-SA unless otherwise noted.