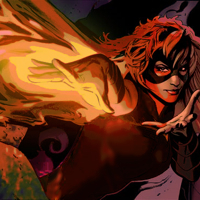 Mutants are a spike in human evolution. The "X-Gene" grants powers and may either be passed parent-to-child or arise as a spontaneous mutation. Its unpredictable nature has led many to fear the rise of mutants. There is a volatile relationship between the general public and the mutant minority that has been smoldering since the Civil Rights Movement of the 1960s.

Legend suggests that human mutants were created by a race of aliens known as Celestials. The mythology holds that they visited Earth over a million years in the past and performed experiments on newly developed life forms, hiding complex genetic potentials within the DNA of what would become human beings.

Of course, it is all too possible that mutants are simply a variant of human evolution triggered by environmental factors and functions in DNA not yet understood by modern science--this is the accepted explanation. The X-Gene allows for manifestations ranging in power from legendary to mundane to dangerous--and even potentially fatal for the carrier. There is no effective way to determine what powers will manifest, though some traits seem to be carried through a family line.

The X-Men and The Brotherhood

Magneto and Xavier know each other personally and disagree vehemently about what the other is doing. Magneto knows of the Institute and has probably guessed about it being the X-Men's base since most of them tend to be teachers there.

The X-Men know that there's a militant Brotherhood of Mutants, led by Magneto.

The Brotherhood know that there's a secret mutant search and rescue team, led by Charles Xavier.

Both groups consider the fate of mutants to be the highest priority. The difference is how they go about it. Individuals are free to formulate their own opinions of the other group based on their own personalities and history.

Xavier: Mutant Rights Advocate
Professor Charles Xavier is a minor public figure whose charisma and good nature have brought him increasing press attention. The charming, gracious headmaster of an exclusive private school in Westchester, Professor Xavier is an outspoken advocate for the rights of all people, especially--in recent days--those who may be other than "average". Professor Xavier is not known (as of October 2012) to be a mutant and his status in that regard will only change through a significant plot arc. Professor Xavier infrequently uses his telepathic abilities to gently divert any speculation as to his status but, for better or for worse, his condition as a paraplegic seems to be smokescreen enough: all most people see is the chair.

XI: The Veil of Secrecy
To the world, the Xavier Institute of Higher Learning is an exclusive private school tucked away in Westchester, New York, and there is no reason to think anything else of it. XIH has access to the world's best media control, security technology, and psionic/telepathic protection. XI uses holographic imaging, satellite control, media control, and low-level telepathic obfuscation fields to protect the identities and privacy of its staff and students. The citizens of Westchester, whether they suspect anything or not, have always been protective of the private school that provides so much business for their little community.

When students venture out into the world as a group, they are often accompanied by Professor Xavier or Jean Grey, to ensure that they do not draw attention to themselves because of appearance or accidents involving their powers. A few "image inducers", a personal holographic device created by Dr. McCoy and Professor Xavier, are available to students and teachers with exceptional physical appearance. The students of the school are not expected to hide themselves as a rule. Image inducers and other disguises are supplied only for their personal comfort and in situations where their safety hinges on secrecy.

It is difficult to pierce the veil of secrecy around XI and even if it is known that some students or teachers at the school have mutant abilities the school is not known as a 'mutant school' as mutants are not uncommon anywhere in the world at this point in time--and it stands to reason that a private school would attract a higher ratio of those who require protection and acceptance. Staff and students are expected to maintain a reasonable level of discretion but are free to associate and socialize with any person. Approved guests and alumni may visit the mansion at appropriate times as determined by their relationship with the school.

Media/Social Media: Staff and students are, of course, expected to abide by XI media control policies and leave all public/media communication to XI staff trained in media control. Blogs, Twitter, and other social media accounts are allowed after students attend training sessions on anonymity and cybersecurity. XI media control monitors material posted publicly for student safety but student privacy is not compromised.

X-Men: The Urban Legends
The X-Men exist. That's not always the name they're given, but there is evidence of a group of mysterious mutants who arrive in times of crisis and fade into the shadows before media and law enforcement can get hold of them. The chance to see them is much coveted by "hero watchers". No one knows where their home base is. Sightings have caused some to locate them out on the West Coast, Portland or Seattle, some believe Canada is their home, and others have said New Jersey or even Washington, DC. That the X-Men have their home base in Westchester, New York, would be a shock to everyone. That they have any association with the quiet little school of XI would be even more surprising.

The same media control that protects XI protects the X-Men. Misinformation, judicious pruning, and false sightings combine to create an exceptional smokescreen that allows the X-Men to operate with relative security. There are other technical options, such as digital scramble technology, holographic screening, and low-level EMP disruptors that can be deployed in times of need, or telepathic redirection, but less is usually more and interfering with people is something that the X-Men prefer to keep to a minimum while keeping themselves safe.

The present rumours (as of October 2012) include the X-Men being a top secret government strike force or a team of aliens on a mission to protect the people of Earth from evil mutants. Either way, no one suspects the truth and no one will, for a long time to come. The more the rumours fly, the harder it will be to find the truth. For now, and until further notice, the X-Men operate in anonymity and secrecy.

Retrieved from "https://heromux.fandom.com/wiki/Mutant_Affairs?oldid=15243"
Community content is available under CC-BY-SA unless otherwise noted.