On the outside, one is met with rising twin spires that reach heavenward in echo of cathedrals built in the largest cities of Europe in centuries past. And within, it is an architectural masterpiece in its layout; from the stone vaulting of the roof, the portals, the stained glass... all held in the floorplan of the cross, with the Nave as it's long piece, and the arms are the church's transepts. The Vestibule comes off of Fifth Avenue, and the other entrances are on Fiftieth and Fifty-First Streets.

For the faithful, it is a place of beauty and peace. Upon entering, on either side are the altars to pray to the saints for intercession behind great columns that support the magnificent structure. Each has a familiar name to those that come: St. Anthony, St. Elizabeth, St. John... and the list goes on. Up the center, darkwood bench pews are set facing the high altar; the statue of St. Patrick stands opposite the pulpit, and the crucifix. Behind that are the stairs that lead to the crypts below.

The Diocese of New York, created in 1808, was made an archdiocese by Pope Pius IX on July 19, 1850. In 1853, Archbishop John Joseph Hughes announced his intention to erect a new cathedral to replace the Old Saint Patrick's Cathedral in downtown Manhattan. The new cathedral was designed by James Renwick, Jr. in the Gothic Revival style. On August 15, 1858, the cornerstone was laid, just south of the diocese's orphanage. At that time, present-day midtown Manhattan was far north of the populous areas of New York City.

Work was begun in 1858 but was halted during the Civil War and resumed in 1865. The cathedral was completed in 1878 and dedicated on May 25, 1879, its huge proportions dominating the midtown of that time. The archbishop's house and rectory were added from 1882 to 1884, and an adjacent school (no longer in existence) opened in 1882. The towers on the west façade were added in 1888, and an addition on the east, including a Lady chapel, designed by Charles T. Mathews, was begun in 1901. The stained-glass windows in the Lady Chapel were designed and made in Chipping Campden, England by Paul Vincent Woodroffe between 1912 and 1930. The cathedral was renovated between 1927 and 1931 when the great organ was installed and the sanctuary enlarged.

The cathedral and associated buildings were declared a National Historic Landmark in 1976. The cathedral is undergoing a huge restoration that will last a planned 3 years at a cost of $177 million. (From Wikipedia.) 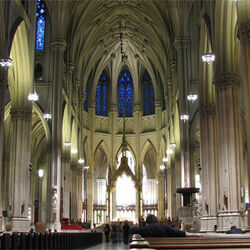 Add a photo to this gallery
Retrieved from "https://heromux.fandom.com/wiki/New_York_City/St._Patrick%27s_Cathedral?oldid=24897"
Community content is available under CC-BY-SA unless otherwise noted.